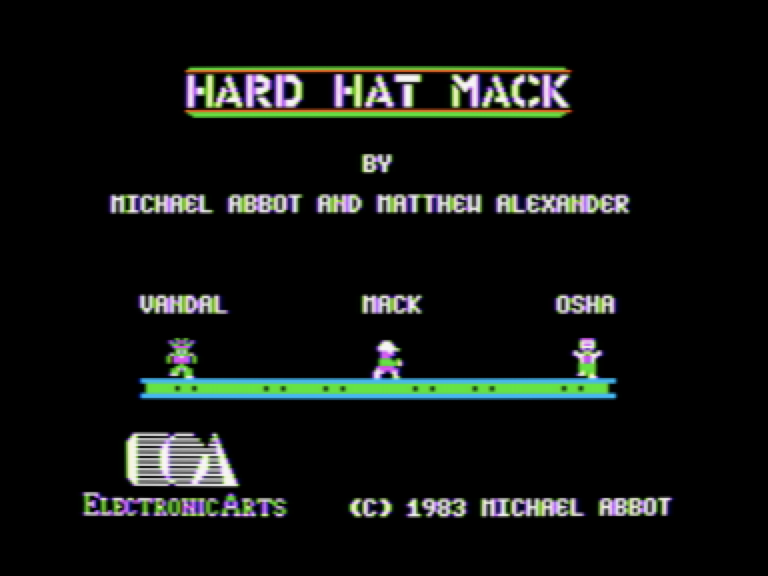 “Hard Hat Mack” is a 1983 action game developed by Michael Abbot and Matthew Alexander and published by Electronic Arts, Inc. Called "EA's First Game" by the founders, this arcade game (showing elements of Donkey Kong and other arcade classics) was a top seller for the company and reigned as an Apple II standard for years.

Click the screenshot to run it in your browser.

Documentation and Information:
Historical Documents and Articles:
Some alternate versions of the program, bootable at the Internet Archive:
Trivia
Description, from Mobygames:
Hard Hat Mack is a platform game similar in concept to Donkey Kong. The player controls a worker who must complete specific objectives in a construction site while avoiding enemies and trying not to run out of time. The game has three vertical levels consisting of simple paths, springboards, conveyor belts, and elevators. The goals involve replacing holes in the floor, catching a moving jackhammer to secure plates, collecting lunchboxes, and dropping wares into a processor. The titular hero loses a life when hit by falling bolts or tagged by wandering vandals or OSHA representatives. The game is over after the player character loses three lives. Completing the three unique levels brings the player back to the beginning, with the game cycling through the same levels at a faster speed.